Eternal God, you dazzle us on the mountaintop with the brilliance of your glow. You bring light into our otherwise dark lives. At first we think we are blinded by your brightness, but you lead us down from the mountain. We pray that you may transform our very eyes, transformed eyes to be able to see you shining through everyone we meet. We ask this through Jesus Christ our Lord, who lives and reigns with you and the Holy Spirit, one God for ever and ever. Amen.

One of the major events on my college campus each year is what is called the Trashion Show. The title comes from the combination of trash and fashion. And it is what it sounds like, a show for people to style the fashion outfits they have made out of trash and recyclables. Like that well known saying, "One man's trash is another man's treasure." Bubble wrap hats, plastic bags braided into skirts, cardboard tank tops. If you watched this year's Grammy's, we are talking about similar outfits to Joy Villa's orange construction fence gown. A full gown just made out of orange construction fencing. The hope is to inspire environmentally conscious art and to get people to see trash in a new light.

Last week, some of the church office staff went to a workshop called Invite, Welcome, Connect. We will be hearing more about it in the weeks and months to come. One of the things they came back talking excitedly about was a video they had seen during the workshop. It's a Chick-fil-a training video. No matter how you feel about Chick-fil-a, I recommend looking up the video on YouTube/online. I did. The video is called, Every life has a story. The purpose of the video is to train workers to recognize that every person that comes into a store has stuff going on in their lives that cannot be seen. The video moves around a Chick-fil-a and when the camera centers on different people, a short description of something going on in their life pops up next to them. A couple walks in the door and next to him, it says, "After years of fighting cancer, he is now cancer free." The one that really gets me is the little girl, the bubble talks about her mother dying in childbirth and her relationship with her father. When we know each other's stories our understanding of them is transformed. When we recognize that everyone is dealing with emotional parts of life, we are usually kinder to each other. There are so many ways in which people's stories impact the way that we see them.

The gospel passage from Mark this morning is rather short. However, it is very dense. There is so many levels in this story. One of my professors told us that the bible is hyperlinked to itself... even before hyperlinks were invented. Most of it references other parts of the bible. Moses and Elijah are the great Jewish figures, one having written down the commandments that defined the Jewish community, and the other being the hope and restoration of the community. The mountain setting reminds us of the time that Moses stayed on the mountain with God and returned with his face shining. He had to wear a veil for most of the rest of his life because people were afraid of his shining face. The dazzling white robes also indicated martyrdom to the early Christians. Their position in heaven gave vindication to those who were dying in the early persecutions of the community. This is not the first, nor the last, story of Peter getting the identity of Jesus confused. Sometimes he calls him the Messiah and sometimes he calls him Rabbi. Here they are on the mountain, the historic place to encounter God and Peter doesn't make the connection at first. Last month we had the baptism of Jesus and God said, This is my son, the beloved, with him I am well pleased. We hear it again today, This is my Son, the beloved. Listen to him. And in the end, they don't just stay on the mountain, like Moses they come down and share the story, share the shining light and glory of God on that mountain. When we have mountain top experiences, those experiences that give us conviction and belief in God, those experiences of greatness in work or life, we share them with others. It makes me wonder, was Jesus perhaps always shining in dazzling white? Perhaps the disciples could not see it. Perhaps what was truly transformed was not Jesus and his clothing. Perhaps what was transformed was their vision. They could finally see what was true before them. That Jesus is God's beloved Son. That Jesus shines with God's glory, with God's light. Jesus is the light of the world. And here we see it.

Do you ever go outside at night and look up at the stars? Here in Houston, they can be hard to see. They are shaded by the light pollution. Sometimes it is simply the full moon. It outshines the stars. Yet, when it is really dark outside, when you are out where there is no electric light pollution, no street lights and outdoor lights outshining the light from the stars, the stars shine with brilliance and amazing delight. The light pollution gets in the way. Sometimes when we are with other people we experience the same kind of thing. We have a hard time seeing other people shine, because there is too much ego pollution, too much of ourselves in the way, too much anxiety or the past or the future in the way. "When the full moon is out it is hard to see clearly the light coming from the stars. So also, when we are so full of ourselves, it is hard to see others glow, they flicker out. The paradox is that the more humble we are the more majestic we all shine. When we give other people permission to shine our own glow is authentic rather than snuffing." (Preaching Tip) In that moment, our eyes are not only transformed, but we are as well. We can see God's glory shining through other people, we can see each other as Christ sees each of us.

The New Testament does not usually specifically come out and say that Jesus is God. It goes in round about ways to connect Jesus with God's glory and as God's Son and as Messiah, as Christ, as the suffering servant from Isaiah and the fulfillment of the prophecies. Yet, we see here today in Mark's gospel, a vision of Jesus as God, transformed in the glory of light that is God's being.

Everyone in this room this morning is going through things that you have no idea about. Everyone in here has the potential to shine with God's glory. We need to open our eyes to be able to see each other. To let down the barriers of our egos, our own journeys, our stuff that gets in the way of seeing other people for who they are. "Every life has a story." I think every life has a story of God with them. I pray that our eyes will be transformed so that we can see God's light shining through.

Amen!
Posted by Elizabeth at 9:23 AM No comments:

Getting ordained
was amazing. In an overwhelming drowning and breathing for the first time kind of way. I was being held and weighed and tested all at the same time. I could see all the details and yet there was a hot haze of joy and nervousness and the weight of giving up oneself and one's life at the tender young age of twenty five. This is my wisdom, to know who I am and how I can be myself in this world. I make my prayer, help me Lord, and then the weight is gone, freedom seems confusing. Yet joy bursts its grapefruit delight through all else and life goes on.

Actions speak louder than words. I have always believed this to be true. Especially when it comes to men. That is how I let go of most of the crap that my brothers say to me. I believe that "Love does," as Bob Goff writes, and that "service is worship," as the vergers pledge, and "well done is better than well said," as that infamous Benjamin Franklin said. (Funny story: When Sara and I went to New Orleans for the first time, for both us and together by ourselves no less, we were wandering around the city and wandered into Lafeyette Square. We both instantly recognized the back of the head of the statue of Ben Franklin, even with his Mardi Gras beads, and neither of us had a clue who the guy in the middle was, and still don't. Why we were both able to recognize the back of Ben Franklin's head from the other side of the square is quite beyond us. However, if this is an aim of the public educational systems of PA and NY, everyone now knows, it worked!) However, I also believe that word choice matters. Part of what was so intense about the ordination were the words. They mattered. It mattered that I stood and spoke to my belief in God. It mattered that answered the questions with simple statements of conviction. It mattered that the people present had to answer on behalf of the whole community of faith. We were in it together, not just because of our proximity, but because of our words.

There is a room that I had a class in during college which had huge windows. I had class around noon time there and I used to stare in rapt attention at the way the light fell in that room. I used to think about how gorgeous that light was and how light shimmered and danced the same way all over the world at different times. The light in Tuscany in the fall. The light in Seattle during cool clear spring mornings. Different particles, of course, but light of the same origin. We were all standing there in a church, on a small portion of land on a rotating planet, all from the same origin. Beauty can be simply terrifying.

Grateful does not even begin to describe how I felt.
Beholden, thankful, indebted, but also a huge mix of joyful and terrified.
I don't think I've ever held a Bible so tightly before in my life.
And that's an action that will stay with me for the rest of my life.
My first act as a human being who just became a priest was to find the nearest Bible and hang on for dear life. My first public act as a priest in the church was to offer peace.
The service was created that way.
The ritual foundation of a priest is scripture and peace.
Somebody knew what they were doing.

P.S. The video of the service is on my YouTube channel, linked here as the top video in the right column. 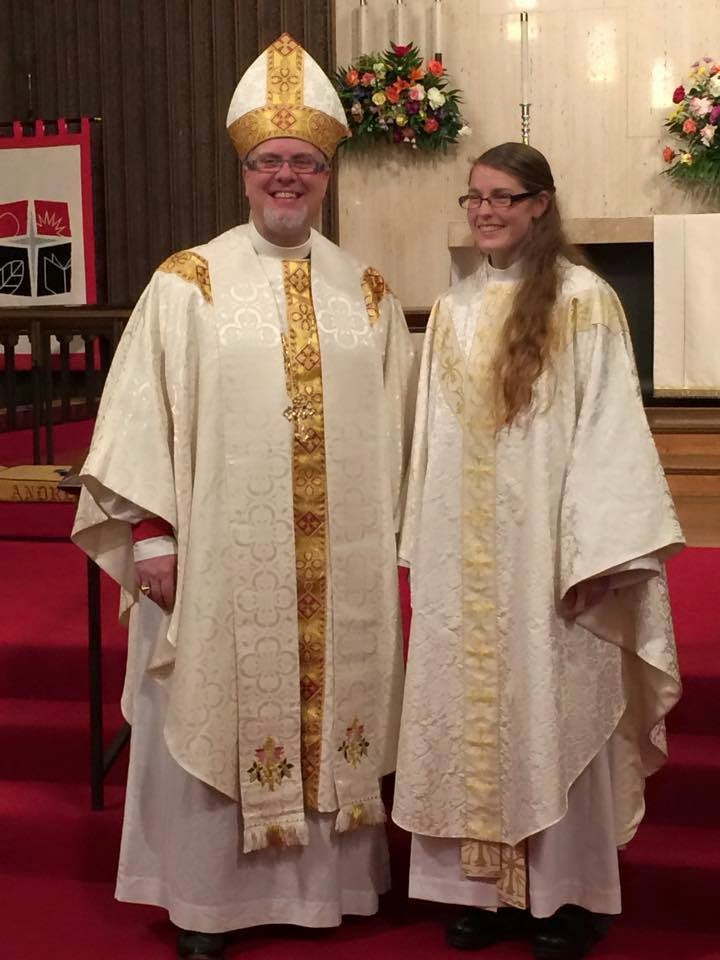 Posted by Elizabeth at 4:57 PM No comments:

Elizabeth
Mother Elizabeth is a Episcopal priest, poet, and triathlete, currently living and working and crafting in small town Franklin, Pennsylvania. All of the statements are her own, except when she attributes. She tries to make sure everything is attributed properly, please excuse an occasional mishap. She is in love with God's world and doing everything she can to make sure people know about Jesus.